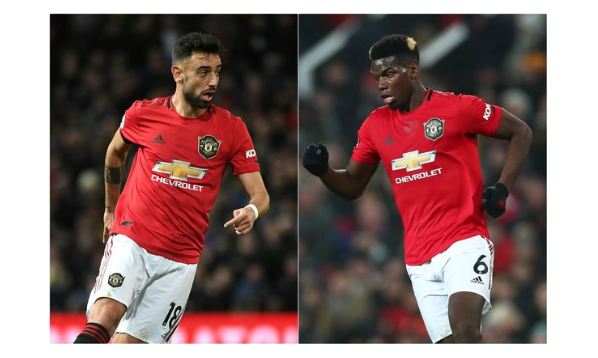 Manchester United followed up their 3-0 Premier League win over Sheffield United on June 24 with another 3-0 win over Brighton and Hove Albion 6 days later. Although United faded off sharply in the 2nd half of the Brighton game, the two matches were without doubt their most convincing and impressive possession-based game under Ole Gunnar Solskjaer. Two clean sheets, 6 goals, 25 shots of which 12 were on target, a first career hat trick for Anthony Martial, beautiful passing combinations between Pogba and Fernandes, an average ball possession of 65%, and a complete, total domination of both games have led fans and pundits alike to rave about United’s new look.

Both matches saw Paul Pogba and Bruno Fernandes start (for the first and second time) in a 4-2-3-1 shape, with Pogba playing as the deep-lying playmaker in a double pivot beside Nemanja Matic, while Fernandes played higher up the pitch as the most advanced midfielder flanked by Rashford and Greenwood.

While Fernandes had the license to roam forward, Pogba sat deep to unlock the opposition defences with his trademark long passes, reminiscent of Andrea Pirlo and Paul Scholes. Both players linked up nicely for 2 of Martial goals against Sheffield United, and Pogba gave a direct assist for Fernandes first goal against Brighton.

With Pogba still having 1 year left on his contract, and Fernandes having five years still to play, it seems most likely that the duo will play together for the 2020/2021 season.

This then leads to the question: is 4-2-3-1 the most suitable formation to maximize the potentials of both players? Let’s quickly take a look at the practicability of other formations to feature both Pogba and Fernandes.

In the 3-5-2 formation, 3 central defenders form the backline, with 2 wingbacks flanking 3 central midfielders behind 2 strikers. With this formation, both Pogba and Fernandes will play as the creative players, with an holding midfielder-Matic, Fred or McTominay. This will likely suit both players well, as Pogba’s preferred role is the left of a three-man midfield, and Fernandes will also have the license to roam forward with passes, dribbles, and shots. Also, the fact that a defensive midfielder, 3 center backs, and 2 wingbacks are on the pitch, will act as a sort of security in the case United lose the ball higher up the pitch. The 3-5-2 will also allow Solskjaer field both Rashford and Martial as centre-forwards with Ighalo and Greenwood as back-ups.

The downside to this system however is that, United would be dealt with a lot on the counter-attack through the wings, when playing against a team using a 4-3-3 formation. The 3-5-2 only accommodates 2 wing players that act as both wingers and full backs. In the case of an attack, the wing-back in a 3-5-2 has a double responsibility of marking the opposition winger, and the full back, which creates a 2v1 overload. If the midfielder on that side of the pitch decides to help the wingback and make it a 2v2 situation, it opens up space in the middle of the pitch, which opposition midfielders can exploit to create chances. If the opposition wingers go narrow, the defensive midfielder(s) will be forced to help the center backs deal with their threat, which then opens up space in front of the defence, which can then translate to a bombardment of ‘ouside shots’. So while, the 3-5-2 will afford Pogba and Fernandes the chance to play together with ‘maximum’ security behind, it has a knock-on effect on the defensive shape, especially on the wings.

But this system can be caught out by quick midfield runners, when a counter-attack is launched. This style will perfectly play in to the hands of teams like Liverpool, Chelsea who have lightning quick players that can finish a counter-attack within 10 seconds. The middle of the pitch would be too light with only 2 central defenders, and 1 holding midfielder vs probably 4-5 opposition players, whenever there is a turnover.

When Carlo Ancelotti had Andrea Pirlo, and Kaka in his AC Milan team in the mid 2000s, the 4-3-2-1 was his preferred formation. Pirlo played as the ‘regista’ (deep-lying playmaker), Kaka as the ‘trequartista’ (attacking midfielder) with Gennaro Gattuso and Massimo Ambrosini as the midfield ball winners, while Clarence Seedorf played as the most advanced central midfielder behind Filipo Inzaghi.

With this formation, Milan reached 3 Champions League Finals in 5 seasons, Kaka won the Balon D’or, Pirlo was the best ‘regista’ around, and Milan played the best football in Europe in that period. For United, the 4-3-2-1 could see Pogba as the ‘regista’, Fred and McTominay as the ball winners and Fernandes as the ‘trequartista’, with Rashford and Martial as the two forwards.

This would see a lot of creativity in the middle of the pitch as Pogba and Fernandes would be free of any defensive duties, and focus solely on their creative duties.

However, just like Milan depended solely on their full backs for width on the wings, the 4-3-2-1 would also force United’s full backs to cover the entire wing of the pitch. This system could be easily caught out on the counter-attack through the wings, if the ball is lost high up the pitch. Also, under this system, a lot of passing needs to be done to penetrate the opposition’s defence, with little or no wing play allowed in the system as there are no wingers. This was also part of Spain’s tactics at the 2010 World Cup, where Ramos and Capdevila had to cover their entire wings to provide width, as Iniesta and Villa always came central to receive the ball. With most Premier League teams known for having fast, tricky wingers, the Christmas Tree formation would be easily torn apart on the counter, although it will also provide enough entertainment and goals upfront.

The 4-3-1-2 as proposed in this article is a slight tweak from the aforementioned 4-4-2 diamond. The 4-3-1-2 will feature four defenders, 3 central midfielders, 1 attacking midfielder and 2 half wingers-half strikers. This system would fit all United’s current players perfectly well. Two holding midfielders flanking Pogba, behind Fernandes, with Rashford and Martial upfront on a good day can beat any other Premier League team. With this system, Pogba will have the license to throw his long passes, with the safety of Matic, Fred or McTominay acting as the shield to the defence. Fernandes, on the other hand will play in between the lines, while Rashford and Martial would drift wide to press, and come central to pick up the ball. Also, the fullbacks could join Rashford and Martial to create an overload on the flanks against opposition fullbacks so as to create openings for Fernandes and Pogba to create chances.

The 4-3-1-2 on paper looks most likely as the most suitable formation to field the duo of Pogba and Fernandes, as it provides enough security for the defence with 2 holding midfielders, enough width with 2 full backs and 2 half-wingers.

However, not all strikers can play from the wings, and may find it difficult to do two functions at the same time and still score goals. Only a few like Gabriel Jesus, Timo Werner, Rashford and Martial etc can truly claim to be strikers who can drift wide and play centrally at the same time. Manchester United luckily have both Rashford and Martial, although they will need to improve their finishing and become more clinical in front of goal.

Overall, all the above mentioned formations would on paper suit both Pogba and Fernandes, but it is likely that Ole Gunnar Solksjaer would stick with the current 4-2-3-1, as it provides enough security for the backline.