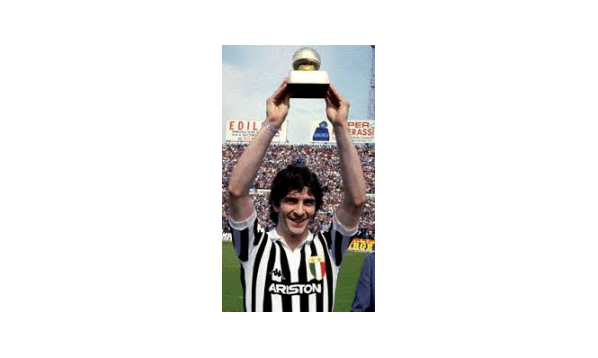 Goalkeepers and defenders are normally the dominant picks in such list as Italy is known for its superb defences both at clubs and national teams.

However, one name that stands out for this author is the 1982 World Cup Golden Ball and Golden Boot winner- Paolo ‘Pablito’ Rossi, who started his career as a winger, and ended as a lethal striker.

Rossi born on September 23, 1956 began his career with Juventus in the year 1972, made his debut in 1973, but injuries and fitness issues saw him play only 3 Coppa Italia matches in 3 seasons. After 3 operations on his knee, he was sent on loan to Serie A side Como where he made 6 appearances in the 1975/76 season.

After a frustrating four years at the Italian top-flight, Rossi made the decisive move to Serie B side Vicenza Calcio where he was top scorer with 21 league goals, and fired the club to the top-flight in his first season.

The 1978 World Cup revealed Rossi to the world as he cemented a place as one of football’s finest with 3 goals and 4 assists, winning the Silver Ball and earning a place in the team of the tournament as Italy finished fourth.

However, Rossi’s problems began when he joined Italian side Perugia ahead of the 1979/80 season after his former club Vicenza got relegated at the end of the 1978/79 season.

Despite his impressive performances at Perugia with 13 goals and a round of 16 place at the UEFA Cup, Rossi was implicated in a betting scandal known in Italy as ‘Totonero’. As a result of the accusations, Rossi was slapped with a 3 year ban from football, which was later reduced to 2.

Although, Rossi claimed to be innocent of the betting accusations and that he was a victim of injustice, the ban still remained in place.

Towards the end of the ban, Rossi was repurchased by Juventus in 1981, and he returned to the starting line-up just in time for the end of the 1981–82 season to contribute to the club's 1981–82 Serie A title scoring one goal in three appearances.

Then came the World Cup, the moment where Rossi secured his spot as one of Italy’s national heroes.

Italy’s coach Enzo Bearzot was criticized for picking Rossi who had barely played football for two years ahead of Roberto Pruzzo who finished the 1981/82 Italian Serie A as the top scorer, but Bearzot insisted on Rossi.

The Azzurri began their tournament with a goalless draw with Poland, followed by consecutive 1-1 draws against Peru and Cameroon, narrowly qualifying to the second group stage.

Even after three lacklustre performances in the first group stage, Coach Bearzot kept faith Rossi and the rest of the team.

The faith was repaid when the team defeated then World Champions Argentina who had Kempes and Maradona, with a master class defensive performance from Claudio Gentile, in a 2-1 win.

Despite Italy’s win over the Albiceleste, Rossi was heavily criticized by the Italian media, after failing to score in 4 consecutive games. Coach Bearzot had to spend 30 minutes in Rossi’s hotel room to sink words (probably motivational or reprimand) into his heads.

That talk clearly worked as the Azzurri stunned the best team on the planet-Brazil who had Socrates, Zico, Falcao and a host of sparkling players. Brazil were overwhelmingly favourites before the match and had scored 13 goals in 4 matches, but Rossi was to have the final say, becoming the second player to score a hat-trick against Brazil at the World Cup as Italy won 3-2 against all odds.

They went on to defeat Poland in the semi-finals with two goals from Rossi sealing a routine 2-0 win before crowning off the tournament with a 3-1 win over then European Champions Germany with Rossi scoring the first goal.

The 1982 World Cup served as redemption for Rossi who had played only 3 games in two years because of the unfortunate betting scandal he was involved in, which he has always claimed innocence of.

Following the World Cup, Rossi went on to win the 1982 Balon D’or and Onze D’or for his brilliant performances that year. A Scudetto title, a UEFA Cup Winners’ Cup, a European Cup all followed before he left Juventus for AC Milan in 1985, eventually retiring at Hellas Verona in 1987.

What makes Rossi’s achievements more remarkable is the fact that he played active football for only 10 years between 1975-80 and 1982-1987.

Within the short period of 10 years, Rossi was able to conquer Italy, Europe and the World. Below are some of his personal achievements he attained both at the club and national team level.

All these and many more are genuine reasons why Paolo ‘Pablito’ Rossi is indeed a candidate for Italy’s greatest player of all time.

This piece was written in honour of Paolo Rossi’s heroics at the 1982 World Cup which Italy won exactly 38 years ago last Saturday, July 11.